Vedic Wisdom: The world will not end in 2017 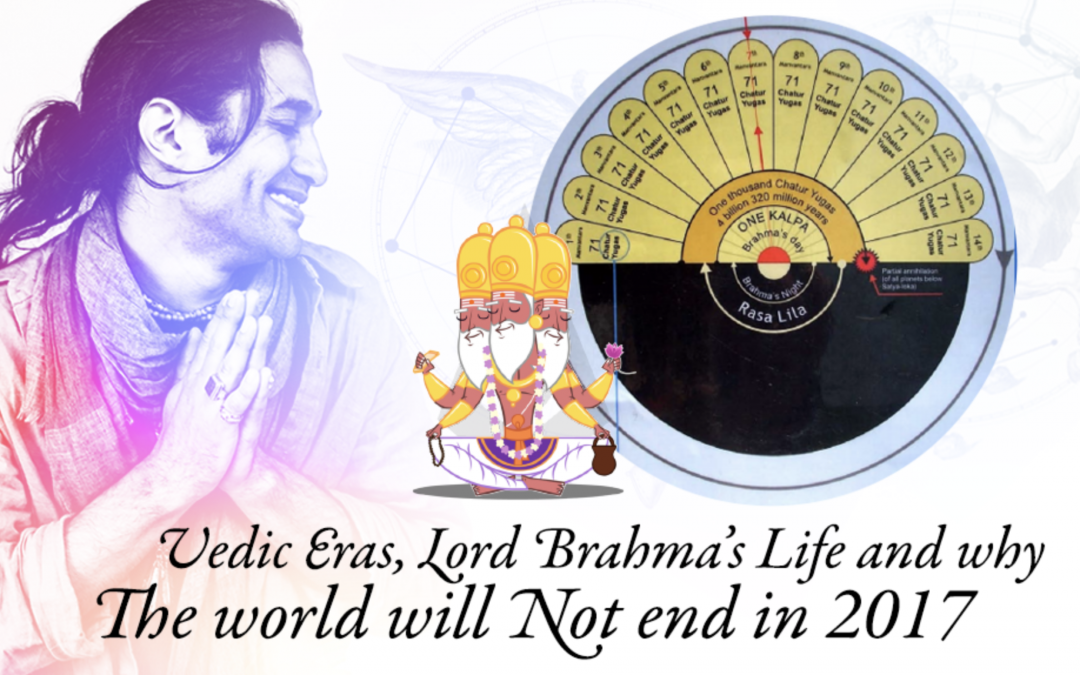 A quick overview of what the Vedas tell us about the cycles of creation and destruction of the world. We will analyse with diagrams one Kalpa, or one day in the life of Brahma, so we can understand exactly where we are situated in the wheel of time, and how the destruction of humanity, is no where near, since Kaliyugas duration is 437,000 years and we are only 5000 years in. A description of the period of grace we are actually going through, and a call for everyone to live according to love vibration, not fear vibration.
In the image you can observe One Day of Brahma, Which icontains 14 Manus, each running a cycle of 71 sets of four Yugas. One set of 4 yugas is equal to 10,728, 000 human years. One Kalpa, or day of brahma is equal to 10,728,00 x 71 x 14, resulting in a total of 1,06636e10 human years. 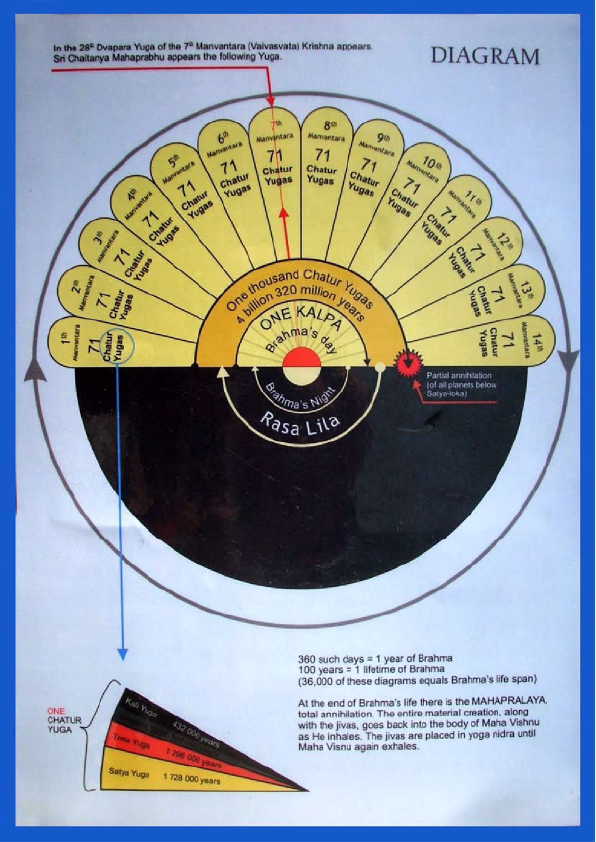 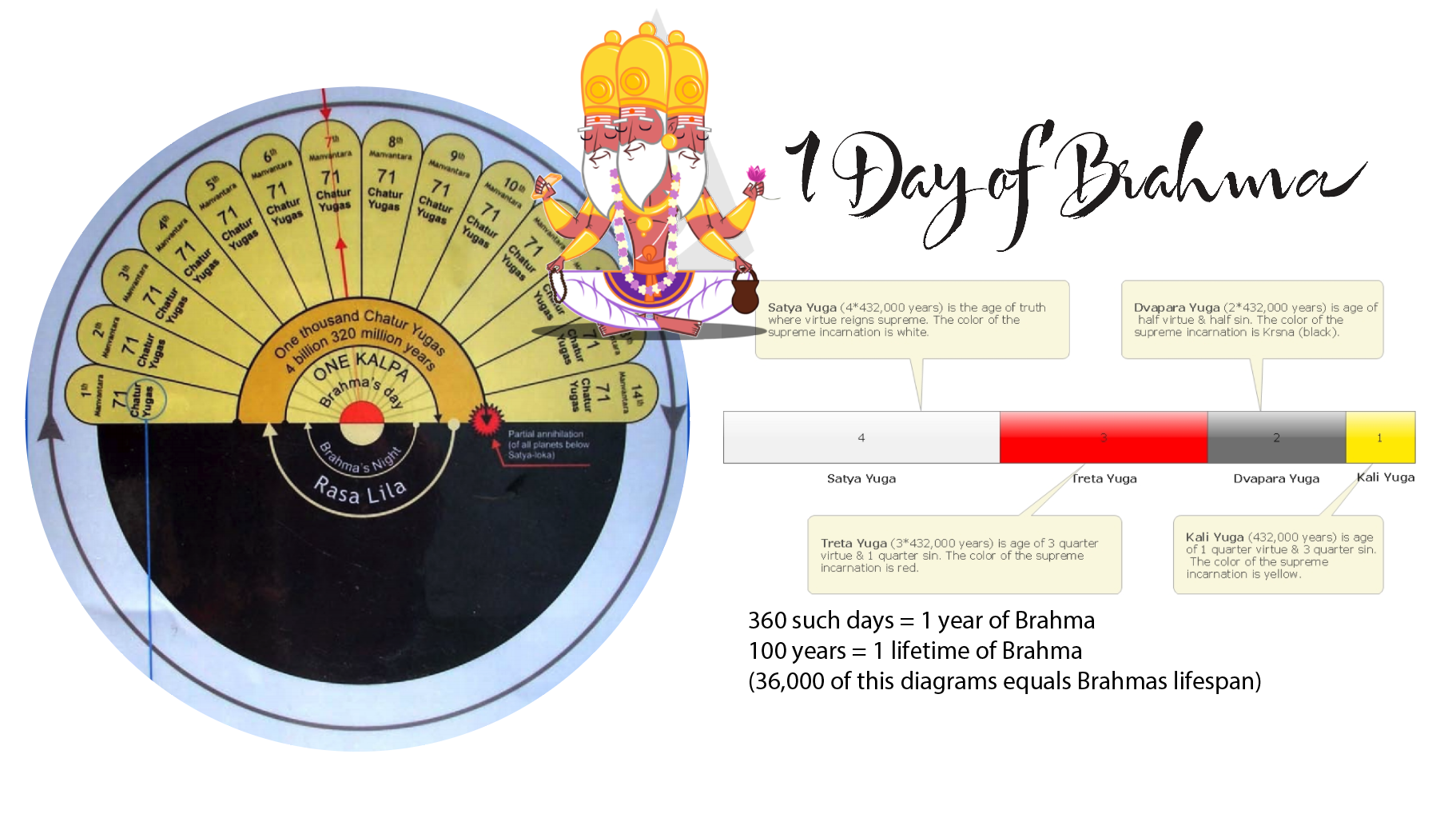 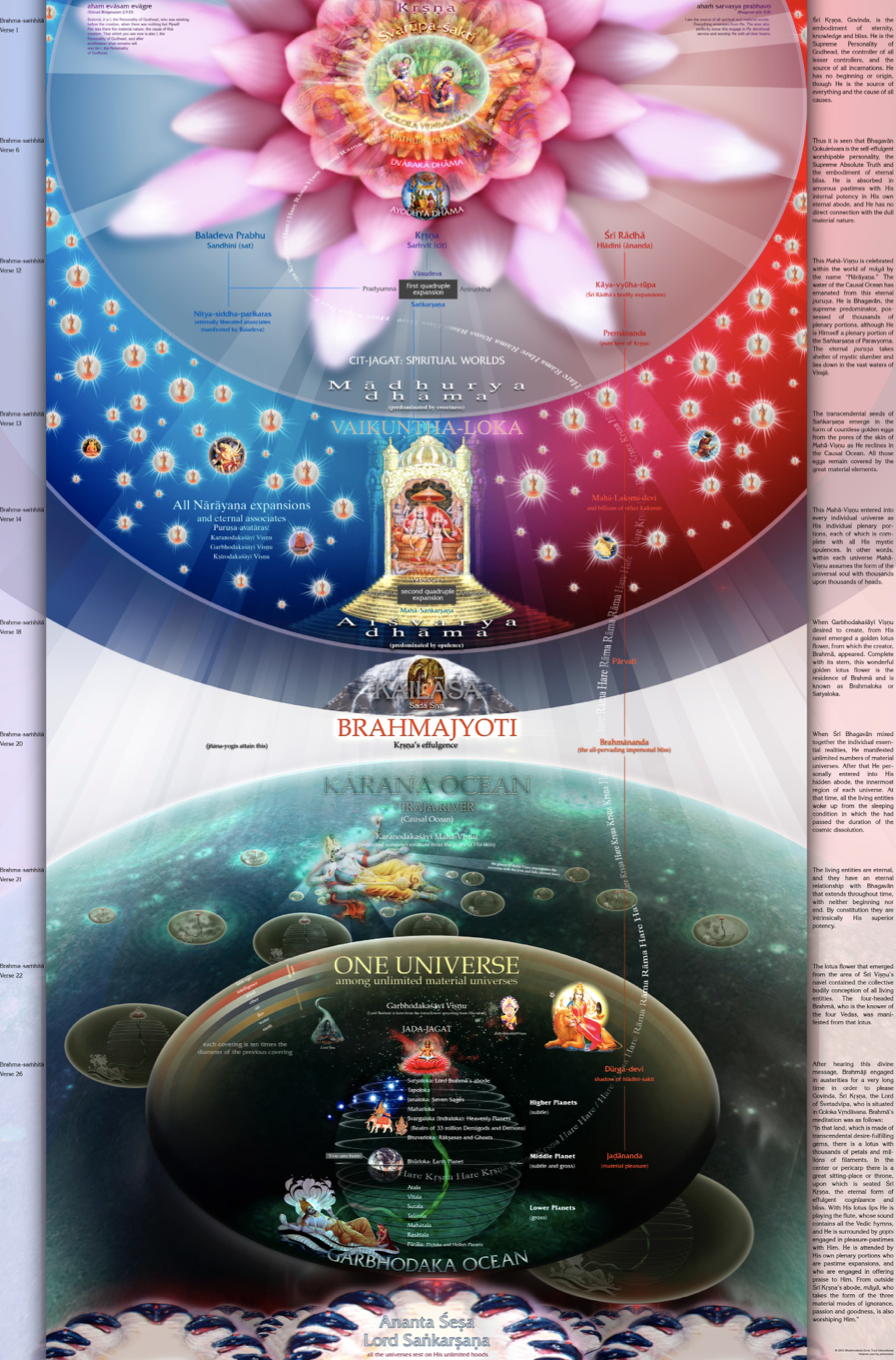 Download Vedic Map of Universe
Along with this video you may find the following download of the Vedic Map of the Universe quite useful.
The explanation of the map is given by my dear friend and mentor Swami BV Tridandi.

To the top left of the map is the catur sloki Bhagavatam verse “aham evasam evagre…” proclaiming that before anything else existed there was only Sri Krsna. Therefore in the center of the map, at the top, is Sri Krsna. On the right of this is the catur sloki Gita verse stating Krsna to be the source of all the spiritual and material worlds “aham sarvasya prabhavo…”. Thus all creation has only Sri Krsna as its source.

Krsna manifests His svarupa-sakti, His pleasure potency, in the form of Srimati Radharani. Radha and Krsna are one, just as musk and its scent or fire and its heat are one, “radha purna sakti krsna purna saktiman…”.

Within the whorl of the lotus of svarupa-sakti to the left, is Sriman Mahaprabhu in Svetadvipa (behind Radha and Krsna). Krsna and His sakhas, the cowherd boys, are in the center, and to the right Krsna is in the groves with the gopis. In the forefront Radha and Krsna are in Seva Kunja.

The left side of the map is colored blue (as it comes from the sandhini-sakti, Baladeva prabhu). The right side is red all the way to the bottom of the map, showing all the female potencies and bliss (ananda) that manifest from the hladhini-sakti, Srimati Radharani.

From Baladeva Prabhu (the sandhini-sakti), who exhibits the primary aspects of pure devotional service and bhakti to Sri Krsna, the first Quadrupal Expansion manifests, consisting of Vasudeva (Gokula), Annirudha (Mathura), Pradyumna (Dwaraka) and Sankarsana, who again manifests the second Quadrupal Expansion as the Vaikuntha realms.

From sandhini-sakti (Baladeva Prabhu) emanate all the nitya-siddha parikara’s forms who perform their eternal pastimes within the cit-jagat (pure spiritual realms). From the samvit-sakti (Vasudeva) all knowledge of relationships (sambhanda-bhavas) are bestowed, and from the hladhini-sakti, Srimati Radharani, come all sweet loving pastimes (ananda)

Srimati Radharani manifests Her kaya-vyuha (bodily expansions) to please Sri Krsna in Goloka, and from Her all bliss, ananda, manifests within madhurya dharma (the realm of the highest aspects of love and affection), as premananda, sevananda, bhajananda, hari-namananda, syamananda etc. etc.

Sankarsana (in the first Quadrupal Expansion) manifests the second Quadrupal expansion which creates all the Vaikuntha realms of aisvarya dharma, where feelings of awe and reverence for Krsna (who is now manifested as Lord Narayana) abound. Again from Baladeva Prabhu (sandhini-sakti, Maha Sankarsana) all the bodily forms, planets, abodes etc. manifest. Also the three purusa avatars, controlling expansions, who manifest and maintain the jada-jagat, material worlds, namely Karanadakasayi-Visnu, Gardhodakasayi-Visnu and Ksirodhakasayi-Visnu. Again from the samvit-sakti (Vasudeva Prabhu), all knowledge of relationships is given and from hladhini-sakti, Srimati Radharani, all the billions of Laxmis (goddesses of fortune) manifest along with the bliss of Vaikunthananda (depicted in red).

Residing in the eternal realm of Kailash, immediately below the Vaikuntha planets, is the abode of Sada-Siva, eternal Lord Siva. In fact, it is described that he has a Visnu form and is Visnu-tattva (Brahma-Samhita, verse 8), but we have shown him in the map with his well recognized Siva form (this has been modified in the third edition of this map). Sada-Siva is present with his own sakti Parvati who emanates originally from the hladhini-sakti.

Below this realm is the light of Krsna’s effulgence which impersonalist jnanis aspire to merge into. This effulgence (brahmajoyti) is manifest from Sri Krsna’s qualities of jnana and vairagya(Chap. 13 Jaiva Dharma), which if perceived with impersonal vision appear as nirvisesa(without form), but when experienced by the bhaktas is recognized simply as the effulgence of their sweet Lord. The impersonal bliss experienced in this realm originates again from hladhini-sakti, Srimati Radharani, and is known as brahmananda, the bliss of brahma. When this bliss is experienced by Krsna’s bhaktas as His effulgence, it is also known as brahmananda.

Between the Material and Spiritual Worlds

The Karana or causal ocean, or Viraja River, is depicted below the brahmajoyti. This marks the boundary between the material and spiritual worlds. Vast and beautiful, it’s spiritual waters ornamented with brilliant waves churned by the mighty storms of Krsna’s transcendental effulgence. Here Karanadhakasayi-Visnu, (or Maha-Visnu) reclines on Ananta-sesa (Baladeva Prabhu), “from whose skin-pores unlimited universes are drifting like infinitesimal dust particles seen in the sun-rays entering through a window” emanate, to make up the entire jada-jagat, the dull or dead worlds.

Understanding His mood of compassion for the wayward jivas, Rama-devi (Laxmi’s expansion) carries the jivas along with the time factor (kala) through the glance of Maha-visnu into the material worlds through the agent of Sambhu Siva and impregnates the pradhana (dead matter) through the womb of Durga-devi (as the adhara-sakti), which manifests the prakrti (material nature) as a result. Simultaneously, Gardhodakasayi-Visnu enters every single separate universe, manifested from Karandhakasayi-Visnu, and reclines on an ocean of His own persperation known as the Garbhodaka-ocean.

The jivas, within whom Ksirodhakasayi-Visnu (the third purusa avatar) now resides, then proceed to “pierce” the navel of Garbhodakasayi-Visnu (Srimad Bhagavatam 3.8.13) “due to the intensity of their desires to materially enjoy” and a lotus flower is produced from whence Lord Brahma appears. Lord Brahma, through the sakti coming from Sri Krsna, then proceeds to manifests the entire material higher, middle and lower planetary systems, of gross and subtle worlds.

This entire realm of maya-sakti (illusory world) or Durga-dhama (prison house) is also known as bahiranga-sakti. This jada-jagat, with all its unlimited universes, objects and bodies etc. originates from the sandhini-sakti (Baladeva Prabhu) in His service to Krsna. From the samvit-sakti (Vasudeva) again is manifested all knowledge, but in this realm it is mundane knowledge (bhautika-jnana). From the hladhini-sakti (Srimati Radharani), is coming the bliss of all the enjoyment the jivas experience on the bodily, sensual platform, separate from any spiritual bliss of relating with Radha and Krsna. This is known as dead (jada) pleasure or jadananda.

Residing at the bottom of the material universes is Lord Sankarsana and Ananta-Sesa, in His serpent form, balancing the unlimited universes on the His unlimited jeweled hoods.

Running down the left side of the map are verse references and on the right side are the actual verses from Brahma-Samhita, from where all this information is described. Srimad-Bhagavatam and especially Jaiva-Dharma, also illuminate the same wonderful conclusions.

This is simply a mind map and there are many variations of how these tattvas can be illustrated. It is offered to the devotees as a tool where many essential truths can be easily referenced. Numerous details have been omitted for the sake of simplicity. In future editions these can be added.